You'll need to sign up for an account to enjoy RevivalStory, along with its guilds, communities and various other services.

To start the game

Step 1: Download Game Client To play the game, you'll need to download the program that executes it. The set-up program is called the client.

Step 2: Install Game Double-click on “MSSETUP.EXE” to install RevivalStory after the client is downloaded. Click here for installation guide.

Step 4: Run RevivalStory Once installation is completed, you'll see a mushroom-looking RevivalStory icon on your desktop.

Double-click on it to start the game.

Note: Before starting the game, please make sure you have DirectX on your computer. Download DirectX if it isn’t installed.

Step 5: Login to start the Game Login with your email and password registered while signing up an account to start enjoying RevivalStory. 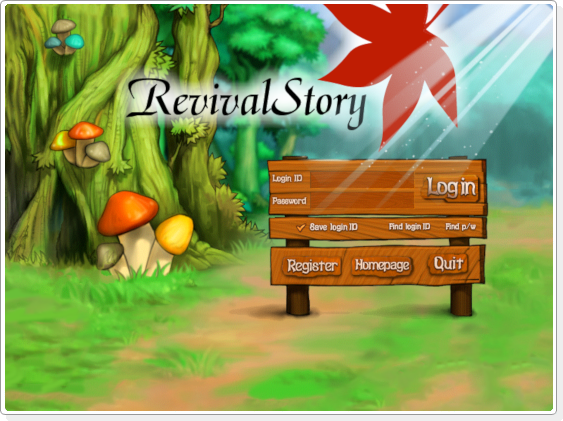 About the world and character

World After you login, the screen will scroll up to show the available worlds. There is currently 1 world with 1 channel available in RevivalStory.

Note: Your account has access to all the worlds available, but your character does not. Whichever world the character is created, the character only belongs in that world. Within the world, however, the character can be in whichever channel it wants to be in.

Character After selecting the world and channel you want to play in, you'll be sent to the Character page. Here, you are able to “Select", "Create" or "Delete" a character.

About the game screen

Interface Once you have chosen your character and entered the game, you'll see the game screen with your character in the middle. You will also notice a long window at the bottom of the screen. That long window is called the interface. 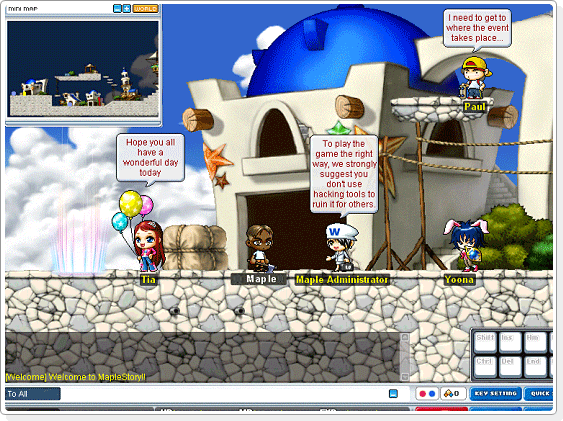 Through the interface, you can check your name, HP and MP. You can also see the chat window within the game. On the right, you'll see the quick slots for your selected skills. Press ESC during the game to access menus such as system option and game option. You can also choose to quit the game.

Controlling the Character Once you start playing the game, you'll see your character as the Beginner class. To move your character, press the arrow keys. To jump and attack, press the "Alt" and "Ctrl" keys respectively.

Hunting After killing a monster, you'll see a message on the bottom-right corner of the screen flashing '***'s EXP went up. That's the amount of EXP gained by hunting down a monster. Once you reach a certain amount of EXP, you'll be able to level up.

(Press S to see your stats or look at the EXP meter next to MP at the bottom of the screen to see how much more EXP you need to level up.)

When you level up, you'll be awarded with 5 Ability Points. Press S to designate your Ability Points to whichever stat you desire, be it STR, DEX, INT, LUK, or Max MP & Max HP. Once you have leveled up, your HP and MP will be full again. If you kill a monster, it will usually drop an item and some Mesos. They can be picked up with the "Z" button.

You can make your first job advancement once you reach level 10 (or 8 to be a magician). To advance, head over to the job adv. guild at one of the occupational towns.

1st job adv. You are required to fulfill the requirements listed as follows:


Once you have advanced, your character's maximum HP or MP will increase, along with receiving 1 Skill Point, SP for short. From then on out, every level up will bring 3 Skill Points, and you'll be able to acquire new skills.

2nd job adv. Head over to the job adv. guild and you'll go through a test according to your job. Once you pass the test, you'll be choosing one of the jobs available that succeeds your current job. The requirements will be LEV 30, SP 0 no matter which job.

Note: Once you have chosen your path, you can't choose a different path and advance with another job later on.

Items are categorized into five main groups: Meso, equipment, use, etc., and pet (along with cash items). Items can be picked up using the "Z" button.

Meso The currency used in RevivalStory. Mesos can be acquired through hunting monsters or selling drops from monsters at various stores.

Equipment items Items that the character can put on. Items that fall under equipment are hats, weapons, accessories, earrings, tops, bottoms, gloves, shoes, etc. The ability to equip an item is based on its job, skill points and level requirements.

Use items Items which are needed to recover HP or MP in the game. Town Scrolls that allow the character to return to the corresponding town are also classified as "use' items.

Etc. items Items which are dropped by monsters. They can be sold at stores for Mesos. Some are also required items for quests. Minerals and jewels also are considered as Etc. items

The general summary of Skill System Excluding Beginners, the other four jobs (Warriors, Magicians, Bowmen, and Thieves) have their own, unique skills. As the character makes advancements, numerous skill slots will be available. The skills won't be available for use just by obtaining the skill book, but rather, the skills will be obtained through using SP's earned after every level up.

Types of Skill Skills are divided into two different categories: active and passive.

Doing Quests Lots of different quests await you in RevivalStory. To do a quest, you need to first look for an NPC that provides one. The requirements for a quest can vary, but usually involves level, fame, job, and/or items. Through the quest, the character can gain items, EXP and other rewards that directly affect your character.

There are two types of quests: one-time quests and repeatable quests. A one-time quest can only be completed once, and then it's over. Repeatable quests can be done again even after completing it the first time. You can access quest names, quest in progress, ended quest, and quest info from the "Quest" menu (HotKey: Q).

NPC: Short for Non-Player Character. Not controlled by a user, but by the computer program instead.

Quest: A specific task given by an NPC. If it is met, the character is rewarded for their hard work. The character can gain items, EXP and other rewards that directly affect your character. If the character quits midway through, no reward will be given.

Item: Everything in the game other than characters, NPC's, and monsters.

Town: A peaceful place where no monster resides. Characters can make different job adv. in different towns. Weapon stores and potion stores are available for upgrades of equipment items, top up of used items and sales of items. The towns are accompanied by various NPC's to greet the characters, too.

Field: Describes all maps which are hunting grounds. Since it doesn't designate a specific area, it is usually labeled as a *** field where *** is the nearest town.

Dungeon: A special hunting place that is not considered a field. Dungeons usually have more powerful monsters than those on the field, therefore it's a hunting place more suitable for higher-leveled characters.

Skill: A special act that a character can pull off while hunting. Skills can be acquired through job advancements. In order to use the skills, you are required to use Skill Point to acquire different skills. More sets of skills are available on each job advancement.

Meso: An official currency in RevivalStory. Can be used at stores and/or during trades for business.

GM: Short for "Game-Master." Game-Masters safeguard RevivalStory so users like you can enjoy the game with ease!

SP: Short for "Skill Point." Acquired after each level up. The character can acquire a skill or raise a skill level using SP.

AP: Short for "Ability Point." Acquired after each level up. The character can raise the stat of their choice (STR, DEX, INT, LUK) using AP.